Over the years, different choices… a single logic!

As soon as the war had ended, Achille Cassart was among the first livestock breeders to select BBC animals according to conformation and musculature. A choice he had made even before the Caesarean section had been fully perfected as a technique and against the advice of the then zootechnological authorities. Valseur's sire, Artois was almost refused by the jury for having too much shoulder muscle.

This selection strategy was the logical outcome of developments on the market: the explosive economic growth of the 1950s also marked a significant rise in demand for more noble beef cuts. Prices of double-muscled veals were swingeing around about the time when steak and chips went on to become the national dish.

In 1977, when double-muscled cattle was in full development and the European Community was unable to produce enough beef to cater for demand, in an article entitled "In Ochain, we want a meatier BBB", Léo Cassart already said: "The selection should look at the quality aspect (carcass conformation and carcass yield) without neglecting the quantity aspects (hardiness and growth)".

Even more so than his father Achille, for a long time Léo felt like an outcast among the BBB breeder community, even though in recent years the BBB Herd Book has sought to defend similar ideas, especially through its chairmen Haufroid and Hocks.

This economic logic served as the basis for Fabroca.

Today, we are required to reckon with new elements:

These elements explain the narrowing of the price gap between noble cuts and processed meat. Which is why the value of an animal today is more contingent on its weight than on its conformation. In light of this context, we are seeing certain French bovine breeds being sold at higher prices at the same age than the price fetched by super double-muscled animals! As yet it is not a widespread phenomenon but it is high time that the emphasis is placed on growth … whilst improving the hardiness. Livestock farms and fattening centres of tomorrow will take on such dimensions that, without this hardiness, they will become unmanageable.

In order to achieve this goal, Fabroca brings the biggest double-muscled culards and a diversified range of different origins … without any taboos regarding breeds.

As you can tell: nothing has changed in 60 years! 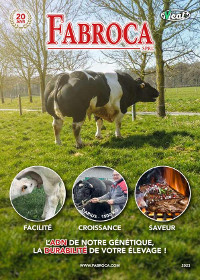